While you wait for a better Indiana Jones film, check out the Fate of Atlantis! 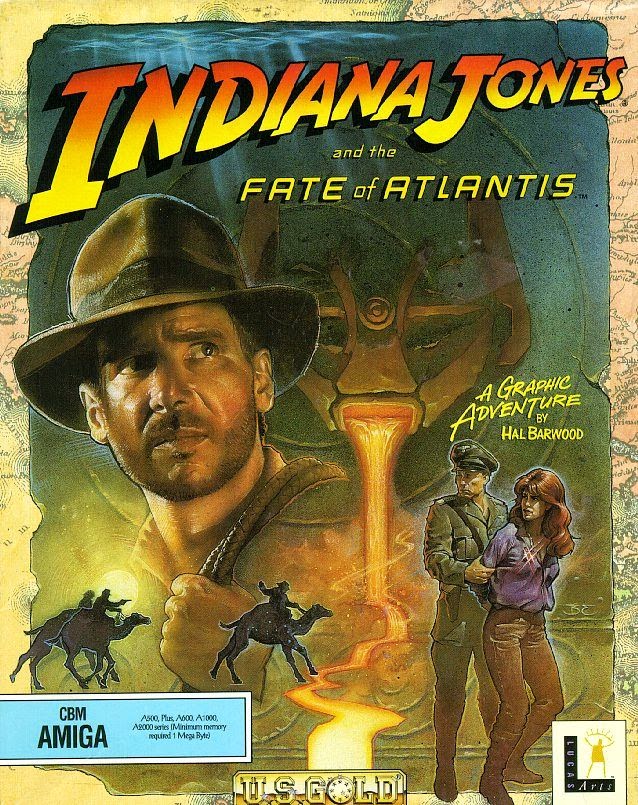 When Indiana Jones and the Fate Of Atlantis burst upon the home computer scene back in 1992 fans like me were ecstatic. The third movie had been released three years before and by this time we were desperate for another Indy film. But in the meantime we would settle for this utterly brilliant graphic adventure!

I bought this game for £34.95 in Boots back in 1992 for my Amiga and played this non-stop for years to come - who can forget the 12 disks that the game came on and endlessly swapping disks in that single Amiga disk drive!


Set in 1939 on the eve of World War II you had to control Indiana Jones in a point-and-click graphical adventure game and help him seek out the lost city of Atlantis and get there first before the Nazi agents.

The game used the SCUMM (Script Creation Utility for Maniac Mansion) engine that featured in Monkey Island 2: Le Chuck's Revenge. This game engine enabled you to use the mouse pointer to click on the screen where you wanted Indy to walk to, talk to a character or even pick up/use an object.

So, starting out in Barnett College you first had to guide Indy in the task of finding a lost statue within the archives of the college library. Form the library attic you made your way painfully down to the cellar where behold, the statue was revealed in an old locker. Unfortunately the statue is soon taken from you by Klaus Kerner, a nasty secret agent of the Third Reich and using some clues from Klaus's jacket you begin your travels around the world meeting various characters that can assist in your search for Atlantis.

First up is a trip to New York and a theatre where Sophia Hapgood is lecturing about Atlantis. At this early point in the game you can follow three different paths in the game. The Team path is where you team up with Sophia to solve the puzzles together. The Fists path is more traditional Indy fare where you mostly fight your way through many of the puzzles. Lastly you can follow the Wits path which includes more tricky puzzles to solve than the other two paths. How you choose to get into the theatre here decides which path you take e.g. if you decide to fight the bouncer then further into the game Sophia will recommend that you take the Fists path.

Thanks to Nur-Ab-Sal, Sophia's useful 'spirit guide', Indy and Sophia then end up in Iceland looking for Dr Heimdall who is leading a dig there. He isn't the most friendly of people but after asking him about the Lost Dialogue of Plato he advises that you seek out Charles Sternhart in Tikal and Felipe Costa in the Azores.

So on to Tikal and once you have navigated your way through the jungle you come across a huge Mayan temple ran by the very man you are looking for, Charles Sternhart. Once you convince him that you are not just silly tourists and with the help of a very knowledgeable parrot then Charles allows you to enter the temple and it is here that you find your first link to Atlantis.

Using kerosene from a lamp you find a spiral design that just happens to fit into a nearby elephant statue. A quick pull of this newly created elephants nose and the tomb of an Atlantean king is revealed! You also find a Worldstone (further on it is revealed that this stone is one of three keys that the Atlanteans used to unlock doors).

Unfortunately Charles runs off with the Worldstone but you find a bead of orichalcum lying in the tomb. This bead is made of the fabled element that the Atlanteans used to power their amazing technology and it comes in useful when you head back to Iceland where you find a frozen Dr Heimdall and a half-uncovered eel statue.
Using the bead of orichalcum in the eel statue frees it from the ice and you can now head to the Azores!

Felipe Costa is an old man who deals in rare antiques and he shows great interest in your eel statue from Iceland. He agrees to trade the statue with information on where the Lost Dialogue of Plato book could be located. Amazingly it turns out that it is held in a collection back in Barnett College where Indy teaches.
So back to the college to find the book! This now takes you back to the scenes from the beginning of the game but this time you can interact more with the background objects. Searching through each of the floors you should soon find the fabled Lost Dialogue of Plato and it contains some useful clues about how to reach Atlantis.

This is now where Sophia reveals which path is more suited to your style of play. I will continue on the Team path for now but if you are interested in the Fists or Wits paths then you can watch my walk-through videos at the end of this article.

Now you are off to Algiers and Monte Carlo to follow up leads on two people that Sophia knows. Algiers first to pick up an old mask from an antiques shop you then go to Monte Carlo to meet Trottier and to convince him to attend a seance in the hotel.

Using the mask and a handy bed-sheet you manage to scare Trottier from leaving the room and leaving behind his Sunstone key behind. Now you have your first key!


Back to Algiers and it's time to scour the desert in order to meet Omar who helps you locate at Atlantean dig out in the desert. But first you need to make some trades with a local stall-keeper, a beggar and also to convince Sophia to assist the knife-thrower in his act! Having done all that you should then be in possession of an all day pass for the balloon sight-seeing on the roof of a local house.

Handing your pass over to the balloon owner allows you to enjoy a superb view from the top of the balloon. And once you cut the balloon cord with the knife from the knife-thrower then you are free to float away and over the desert to find the dig site. Here is one of many in-games where you must pilot the balloon over the desert, referring to the map to locate the exact 'X marks the spot'!

Once you locate the dig-site you soon lose Sophia and have to work out a series of puzzles in order to rescue her, the first being to start up the generator underground so you can locate several useful objects (that ship rib really comes in handy). Then you find that using the Sunstone on the mural opens a door to enable Sophia to escape and once you work out how to start the truck then it's off to Crete.

Aaah, Crete. Probably my favourite part of the game. I remember spending hours at the Crete dig site when I first bought this game wondering what on earth you were supposed to do here with the surveyor's transit and I searched round every single ruined room looking for the slightest clue. Eventually I worked out that you had to locate the bulls head and tail statues and use the transit on them until you located another 'X marks the spot'.

The Crete section of this game even encouraged me to visit the fabulous Minoan ruins at Crete a few years ago where there is indeed evidence of a bull's horn statue just like the game. Unfortunately I forgot my surveyors transit though.

Once you have all the Atlantean keys the Sunstone, Moonstone and Worldstone then you can at last gain entry to the labyrinths of Crete. Here there are many devious puzzles to solve and you will find yourself wandering the underground caves for a good long while. A useful item to have here is the amber fish on a string which will locate any orichalcum beads located nearby.

Unfortunately once you escape from the labyrinths then the Nazis turn up and kidnap Sophia and take all your stone keys, forcing Indy to secretly follow them onto their submarine. Once safely aboard you have to work out how to get your stone keys back, rescue Sophia from her captors then take over the submarine and pilot it to the correct location of Atlantis! Just another day for Indiana Jones.

And so you reach the legendary lost city of Atlantis. Frustratingly it's pitch dark when you leave the submarine and you first task is to make some light and also to open the first door into the main Atlantean concentric circle.


And what do you find in Atlantis but a city that has long been abandoned by it's creators. The only residents now are Nazis and crabs and a few ruined robots. First thing Indy needs
to do is create some more orichalcum beads and for this you need some lava.

Find the missing parts to the huge orichalcum machine, pour some lava into it and hey presto some more beads! Now you can get past the second door into the inner circle.

But what's this? Sophia trapped in a jail cell and no way of getting out? And how do you deal with the giant octopus in the canals so that you can obtain the raft?


Catching a crab is the way to deal with the octopus, then you can start the raft and float further up the canal. What you really need now is something to level Sophia's cell door open so that she can escape. A hinge pin would be ideal.....


At last you have reached the centre of the rings. And this is where you find that Sophia is taken over by her 'spirit guide' Nur-Ab-Sal. Which turns out not to be a spirit guide but in fact a long lost evil resident from Atlantis which quickly possesses Sophia and refuses to leave Atlantis. The necklace is the key to dealing with this nasty spirit and once you destroy that then Sophia is free.

Activating the machinery enables you to go even further into the centre of Atlantis and you soon find yourself in a huge cavern complete with a maze of entrances and exits. You also need to navigate a tricky lava field.


Finally you reach the 'god room' which features ancient Atlantean technology to turn normal people into spirits and literally become 'gods'. Unfortunately the technology didn't quite work as planned, much to your amusement as you watch the Nazis turn themselves into evil beings that soon fade into nothingness. Be careful on the options that you choose for Indy here or you may find out that it's him that's turned into one of these spirits!


And there we have a fitting end to a wonderful game. With Atlantis destroying itself and sinking back into the sea from whence it came then Indy and Sophia escape and the credits roll.

You can watch me complete all 3 paths to this PC game below - Team, Fists and Wits paths. Each path has similarities and also differences e.g. in the Wits path you have to navigate the streets of Algiers trying to follow the servant to his masters' house. It only works if the servant is wearing a bright red fez though, otherwise you lose him in the crowds.


You can purchase the original game now at Steam here.
Posted by Malc at 5:21:00 pm
Email ThisBlogThis!Share to TwitterShare to FacebookShare to Pinterest
Labels: Indiana Jones, LucasArts