Super Gran - the baddest of all Super Heroes 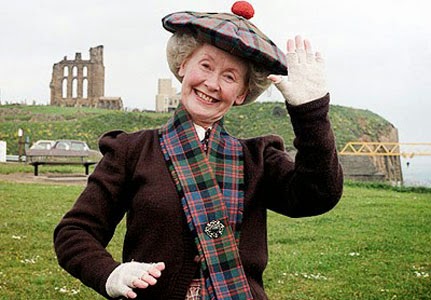 Stand back Superman, Iceman, Spiderman, Batman and Robin, too…In 1985 a superhero like no other emerged onto our television screens. A frail, elderly grandmother called Granny Smith was accidentally hit by a magic ray which was created by Inventor Black. This magic ray gave Granny Smith superpowers, including super strength and incredible athletic abilities.

Set in the fictional town of Chiselton, Super Gran's main role in the television series was to protect this small town from it's variety of villains, mainly 'Scunner' Campbell (played by Iain Cuthbertson). Super Gran herself was played perfectly by Gudrun Ure who did a lot of the stunts in the series herself, having only one stunt double. Throughout the series you can see Super Gran driving a quad bike, playing football, doing a hand-stand while on a skateboard, flying a bike and stopping a helicopter from taking off by sheer muscle power!


The television series was broadcast on ITV from 1985 to 1987 for 27 episodes and was filmed in the North East of England, including the Beamish Museum.

Most memorable about the series was the fantastic theme tune, sung by Billy Connolly and actually released as a single which reached no.32 in the charts. The intro to the tv series featured an animated scene of how Super Gran received her super powers, and the ending credits featured clips of Super Gran performing her many stunts throughout the series. You can watch a classic episode below, I recommend skipping forward to the end credits!


Super Gran also featured on home computers like the ZX Spectrum. There were two separate games, both published by Tynesoft - one was a graphic adventure where you had to type in commands and solve the various puzzles. You can watch me complete this adventure game below:


The second computer game was more of an arcade game, where you controlled Super gran through 4 very different levels to find the invisibility ray. Once complete then the game made you invisible while you played through the same 4 levels again - finally allowing you to finish the game. Watch me complete this game below:

Posted by Malc at 9:11:00 pm
Email ThisBlogThis!Share to TwitterShare to FacebookShare to Pinterest
Labels: super gran