The UK Computer Museum in Cambridge asked for volunteers to fix their old arcade games that were in non-working order.

Thanks to the volunteer's help some of the old arcade units which have been out of use for up to 17 years are now working.
Read more about this here.

The UK Computer Museum is worth a visit for all retro game fans and features tons of old computers, consoles and even calculators from the past!
Posted by Malc at 9:18:00 pm 1 comment:
Email ThisBlogThis!Share to TwitterShare to FacebookShare to Pinterest
Labels: uk computer museum 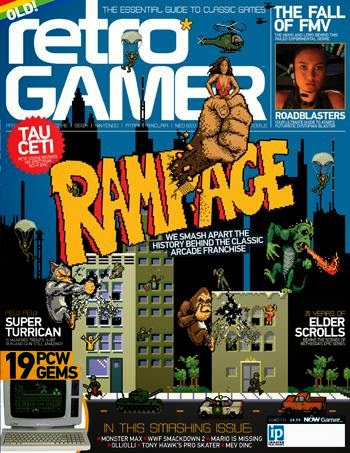 Issue 131 is now out in the shops. This month features:

History Of Rampage
- Discover how George, Lizzie and Ralph went on to rule the world

The Making Of Tony Hawk's Pro Skater
- Discover how Neversoft made its hit game, without ever making a sports game!

The Bluffers Guide To Interactive Movies
- Discover why FMV games were the next big thing, and why it went wrong

Listen to over 2 hours of the best Spectrum 128k music!

Prepare your ears for the best in Spectrum music! Click on the video link below to listen.

Posted by Malc at 9:55:00 pm No comments:
Email ThisBlogThis!Share to TwitterShare to FacebookShare to Pinterest
Labels: spectrum music

The ZX Spectrum was capable of some really impressive music, whether on the humble 48k machine or the more advanced 128k model. Featured here are some what I think are the worst of the tunes to feature on the Spectrum.

Avalon - Great game but raspy music with no real tune.
Booty - Okay this was only £1.99 and the game wasn't half bad, but that continuous Sailor song music! At least you could switch it off.....
Bounty Bob - Another decent game but the tune is far too high pitched for my ears.
Con-Quest - Out of tune with screamingly high notes. Help!
Dominator - I'm not sure if this is an actual tune or if it is just continuous background noise?
East Enders - One of the worst games on the ZX Spectrum, and the music is no better. A poor rendition of the famous East Enders tune.
Gallatron - Reminds me of the 'music' I used to create in my early Spectrum programming days......
Gerry the Germ - An awful game with music that has no real tune. Very poor!
Gladiator - A tune more appropriate to a BASIC game. At least the 128k version was a bit better.
Goonies - A game that would be much better with sound effects during play rather than this awful attempt at music.
Heist 2012 - No music here, move along!
It's Only Rock & Roll - A classic strategy game but the demo of your band playing on stage is laughable....
Nemesis - Could have been so much better. Simple and repetitive.
Nonterraqueous - Good game for £1.99 but a noisy, irritating tune!
Pulse Warrior - A poor 128k tune. Again it would be better with simple sound effects rather than this amateurish tune.....
Tapper - Nice little game but please can you switch off the in-game tune!
World Cup Football - I used to love this football game in the early days but the tune is so annoying after a while! Impressive programming at the time though, I thought.

Listen to my worst selection of tunes below!